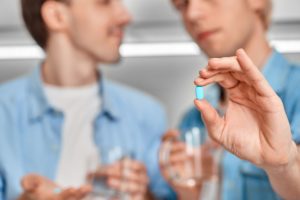 Among Belgians, men and trans women who have sex with men are most vulnerable to contracting HIV. There are now several prevention options available in Belgium, PrEP being one of the most recent additions. PrEP has a lot of potential to limit the spread of HIV. However, not everyone who is vulnerable to acquiring HIV uses PrEP, and some people who use it are not considered vulnerable by the official standards. This situation is called the ‘PrEP-gap’. Our work package is especially designed to find out how big this gap is and why it occurs.

There can be many explanations about why people who are vulnerable to HIV are not using PrEP. Maybe they prefer condoms, or they don’t see PrEP as a ‘normal’ prevention option yet, or think it is not meant for them, or that people will judge them for taking it etcetera. We want to know how norms among men and trans women that have sex with men are related to the PrEP-gap.

If we knew the size of the gap, and the reasons it exists, we can advise the government and clinics about how to provide sexual health care that reduces the spread of HIV as much as possible. For example by changing who is considered vulnerable to HIV and can get a prescription, who gets reimbursed and where and how easily you can get PrEP.

Our main objectives are:

– Examine which men and trans women who have sex with men are most vulnerable to getting HIV.

– Assess which men and trans women who have sex with men are eligible for PrEP under the current criteria.

– Examine whether PrEP is reaching those most vulnerable.

– Find out what the current norms around prevention and PrEP are.

– Understand the connection between PrEP norms and PrEP-use.

How will this research be done?

– We do a new kind of survey called a ‘web based respondent driven survey’ or ‘WEB RDS’ for short. Questions in the survey are about sexual

– What’s new about this method is that we don’t just try to get as many people as possible to fill it out. Instead we start with a group of men and trans women that are as different as possible from each other. We ask them to fill out the survey and send it to three people they know. Those people are then asked to send it on to three people they This way we get long chains of people, as shown below, and reach people whom we would not reach with a regular survey.

– In order to put the numbers into context and understand the ‘why’ as well as the ‘how many’, we hold in depth interviews about personal prevention

choices, and about the wider sexual culture that people make these choices in.

– The size of the PrEP-gap and advice on how to reduce it; in order to optimally prevent the spread of HIV.

– Optimal HIV-risk criteria and PrEP-reimbursement criteria for use in Belgium.

– How to better estimate total HIV-risk and PrEP-eligibility among a large group of people, based on a small sample.